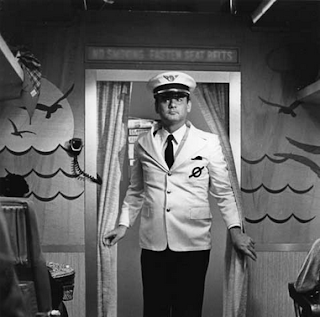 ... is up on youtube. It's very difficult to find elsewhere, so I've posted it below, because that is the reason to have a blog. (It was never released theatrically, it seems, and like another of my favourites - Karel Zeman's "Baron Munchausen" - it's not available on DVD. Nor is Gilbert's Fridge. Posterity's taking the piss.) You should watch it. It's personal, like a dream, like someone's made a film just for you. By which I mean "me". Maybe its rarity explains why I'm so happy to call it the favourite - I won't have to defend the choice because who else will have seen it? But I've sat friends down in front of the VHS and they seem to have loved it, taped on a whim unseen when it played once on BBC2's Moviedrome over twenty years ago. Presenter Alex Cox's introduction is on that tape first, and I force them to watch that too, because I want them to have as great a time as I did. It all has to be done just right. In case I'm wrong. And that's why actually I'm going to shut up about the film now and instead put up a transcription of that perfect introduction. Then we can talk about it after, yeah? Here: 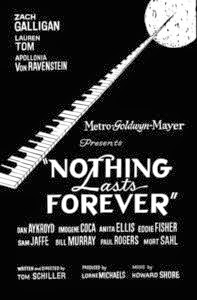 "Nothing Lasts Forever was directed by Tom Schiller in 1934. Schiller was assistant prop man on King Kong. (It is he, covered in boot polish, who stands on top of the giant gates on Skull Island, shouting 'Kong Konga Kong!' as the giant ape comes looking for Fay Wray.) The same year, 1933, he directed the first of a series of docudramas about the lives of great pianists. Nothing Lasts Forever, the story of the concert pianist Adam Beckett, is the second in his long series of piano-oriented films. Beckett - a vastly popular concert pianist of the teens and twenties - died tragically in 1928, when he was mistaken for John Dillinger at a Chicago rooming house. The young man was leaving the building with a packet of curtain rods wrapped in brown paper, when he was accosted by two nervous FBI men who believed they had caught America's most wanted fugitive. What they didn't know was that Beckett, like Beethoven before, was completely deaf. The tragedy that followed forms the climax to Schiller's moving film. Interestingly, there was also a Russian biopic about Beckett made only two years later. Known, rather improbably, as Last Streetcar to Manhattan, it told the story from a Marxist-Leninist point of view, depicting Beckett as an impoverished proletarian who attempts to organise a Young Workers' and Pianists' Communist League. The Russian version, directed by Boris Turnovski, was later denounced by Stalin at the 25th Plenum of the Supreme Soviet. Even as Turnovski and his fellow filmmakers departed for internal exile, the original American Nothing Lasts Forever began to enjoy a covert popularity behind the Iron Curtain. Both films were removed from the banned list by Nikita Khrushchev in 1959. Aleksandr Solzhenitsyn reputedly declared that only Schiller would be allowed to direct the feature version of The Gulag Archipelago. Ronald Reagan and Mikhail Gorbachev apparently discussed Nothing Lasts Forever at length during their first historic summit, Reagan having tried out for the role of Mendehlsson in another of Schiller's biographies of great composers (the role eventually going to Randolph Scott). Now aged almost ninety, Schiller lives in New England, where he and Solzhenitsyn still meet regularly, discussing their adaptation of The Gulag. The money's already in place for this big-budget, American/Russian/French co-production. The only delay apparently is caused by a disagreement between Schiller and Solzhenitsyn as to how many musical number shall appear in the film."